← more from
Rebel Up! Records
Get fresh music recommendations delivered to your inbox every Friday.
We've updated our Terms of Use. You can review the changes here. 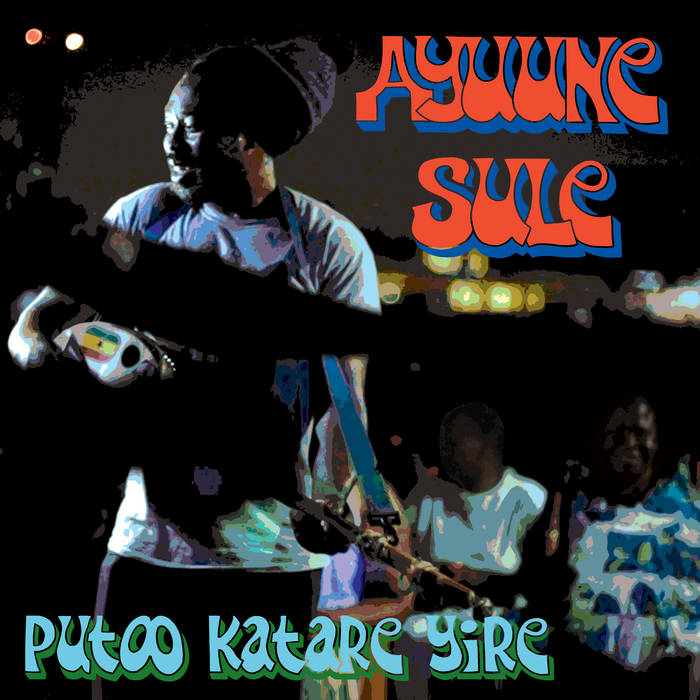 Ayuune Sule: kologo, voice
This is the sound of optimism and hope. “Putoo Katare Yire” or “Wickedness has no home”, is the title of Ayuune Sule's brand new album translated from Frafra, the language from Ghana's Upper East Region and Ayuune Sule's first language. Ayuune Sule is a master of the Kologo, the double stringed lute played by troubadours for spiritual and educational messages.

During his tours through Europe in 2018 and 2019 Ayuune Sule got crowds dancing with his new song “Don't Be Lazy”, telling the people that "when you dance, when you move, the sickness runs away and leaves your body free. Your body will be strong." Back in Ghana, he went into the studio and recorded a very catchy version of that song.

In the North of Ghana in Bongo near Bolgatanga, where Sule grew up, is the location of the Top Link Studio by producer Francis Ayamga. He has been on tour together with Ayuune Sule all over Europe as part of the band of Ghana's number one Kologo star King Ayisoba. Ayamga's studio is a magnet for local talents and musicians of the region, nationwide and beyond. In collaboration with Makkum Records much of Kologo Power and Frafra Power music has been produced there, shaping the scene that it is today. Even African Head Charge's front man Bonjo Iyabinghi Noah decided to check it out and ended up recording two songs there with Ayuune Sule for this new album.

Ayuune Sule brings the soul into Kologo Power. He is the main kologo star in Kumasi, the second city of Ghana and capital of the Ashanti region. Together with King Ayisoba, Guy One, Atongo Zimba and Sambo, he represents the generation that broke Kologo music outside of the North East Region of Ghana. In 2015 he released his 7" single with the songs “What A Man Can Do A Woman Can Do More Better” and “Who Knows Tomorrow” on Makkum Records (MR12), which brought him to western scenes and audiences.

In 2018 his first full length album “We Have One Destiny” appeared on Makkum Records and Rebel Up Records. A solo tour in Europe followed in 2018 and 2019, when Ayuune Sule toured extensively from Denmark to The Netherlands, Poland, Spain, Belgium and Bulgaria and became one of the biggest Kologo stars known. Because of COVID19 he was blocked from returning to Europe and decided to write an uplifting song about the corona virus, released digitally last summer on Rebel Up Records. After that he returned to the Top Link studio and recorded a full new album, featuring artists like Prince Buju and the legendary Bonjo from UK's outernational dub masters African Head Charge. The new album “Putoo Katare Yire” is a true explosion of high energy and catchy songs, Kologo driven, traditionally rooted yet aiming for the future. True Soul and Kologo Power coming from Ghana's Ayuune Sule, truly irresistible and touching. Released by Makkum Records in collaboration with Rebel Up and Red Wig.

Ayuune Sule: “My people, let me tell you the meaning of my songs. Tezaa So Ndeyine means “The creator is our father” and is about some people sitting back with their bible, talking plenty and cheating people, telling others that God is not there for them. But everyone has a God and God is for all. Yelemeghre Kalebona means “No truth”. The truth must be told as many politicians don't talk true, they steal and they cheat. If there is no truth you can not survive. In Fighting Music, I tell my people: "Do not fight with a knife or a gun. Fight bad people with a message and fight them slowly, then they will learn and understand. Tesan Nonge Taaba means ”If we love each other”. All people have to love each other so that God will bless us all. If you fight, God will vex you. Yaalima Nyaane Yoo means “Madness is better than death”. If a person is mad, you can still treat him, if he's dead you will lose the person forever. Putoo Katare Yire means “Wickedness has no home”. Wicked people have problems everyday, never peace and no rest, wickedness has no home. Yaabe Waane means “Ancestral instrument”. I inherited my kologo instrument from my great great grandfathers and I'm supposed to pass it onto my children and grandchildren.”

Ayuune Ayirizeme Suley,often going by the shorter Ayuune Suley, is best known by his fans simply as Sule. Born on 16th March, 1979 to a popular business man called Baba Ayirizeme and a pito brewer, Asibi. He learned to play in his mothers pito bar. Now he is one of the great kologo players of Ghana and part of the world famous King Ayisoba Band. ... more

Bandcamp Daily  your guide to the world of Bandcamp

Alex Rita and Errol from Touching Bass feature in our special London edition of the Bandcamp Weekly.